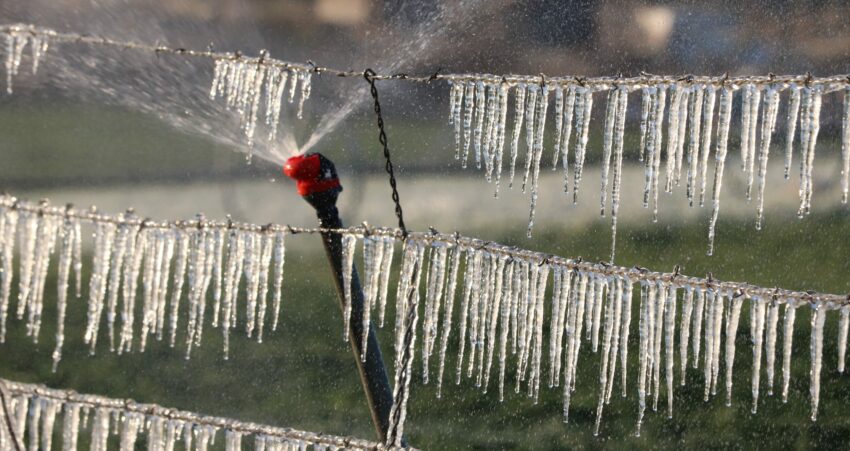 A few days before thanksgiving, while parked in Vegas, I got the craving for Starbucks, so I left the RV park and drove to the nearest one. As I pulled up to the drive through window, the cashier slid the window open and I was bombarded with holiday smells, cheerful employees, and holiday music. The nostalgia and feeling of missing family hit me like a rock. I suddenly wanted to go home for the holidays and be with family. I drove back to the trailer in silence, and when I walked inside I told Nate my thoughts.

We decided to make a plan to drive back up to Boise, and to spend a few weeks there right after Thanksgiving, which we had planned to spend with our friends in Vegas. Unfortunately, a day or so later a huge storm was forecast, including involving the Vegas area. So… we just decided to drop everything and try to get in front of it.  Well… we didn’t make it in front of it… we ended up driving right into it. When Google Maps says you’re 4 hours away from your destination (our stopover in Salt Lake) and that status doesn’t change while you’re driving in that direction for 4 HOURS, you realize it was probably a bad idea.

Snow from the road on the Suzuki

Snow from the road on the Trailer

After a stop in Salt Lake (we made it in, late at night, narrowly missing several spin-outs while in town) we drove the next day to Boise. That day was ironically, a beautiful sunny day.

Lesson learned, though. We thought we did good rinsing off the trailer when we arrived, but after several months of being parked we had reason to inspect the bottom of the trailer, and there is now a ton of surface rust. Ugh. Of course Utah uses salt on the roads. They have a great, big SALT lake! Oh well, another project.

The equalizers WERE pretty…

This had paint on it. Several coats. I swear.

It was indeed great to spend the holidays in Boise with family and friends. We had a great Christmas dinner, and visited the Botanical Gardens for their seasonal Winter Garden aGlow light festival.

Wait, there’s a Jeep there…?

We started thinking about the upcoming maintenance the Grand Vitara was going to start requiring at the mileage she was getting up to (almost 200k!), and we had been looking at Jeeps for a few years now. We even test drove one in Vegas while we were there. It just happened that while we were back in Boise, one appeared that ended up being a pretty good deal. So, we bought the Jeep, and ended up selling the GV to the person at the dealership we were working with for his cousin in Oregon. The plans with the Jeep included upgrades of course (we want to be more involved with the groups that go out offroading while RVing) and double-towing in the states that allow it. That double-tow option was a pretty major reason for the upgrade. While, yes, we could pull the Zuk, there really was no room to put both of our Hobie Kayaks on it comfortably, allowing us to get rid of the small kayak trailer.

Originally our plans had us staying for the holidays and then leaving to somewhere else after, only to return in May because I had won the lottery for Jury Duty. Well, after the holidays we decided to stay a little longer to work on a few projects (it ended up being a really mild winter), and then Covid hit, and we were in lock down. My jury duty got cancelled because of it, but we were still stuck there anyway.

Before and after the lock down, we went on several road trips in the Jeep, including going out with friends to Owhyee Reservoir to see the dam, visiting Atlanta, ID, checking out Succor Creek in Oregon, and playing out in the desert. Nate, myself, and Nancy and John also took an ECCW class and got our licenses. We also took a mostly social distancing overnight road trip to Montana to grab a great deal on a tow bar and brake system for the Jeep.

Frozen Waterfall on the way to Atlanta, ID

Snow trip on the way to Atlanta, ID

With friends having lunch in Atlanta, ID

Going with the Idaho 4×4 on a trip to Atlanta, ID

Playing in the desert south of Boise

Nate and John at Anderson Ranch

Lunch stop with the folks on a road trip

Watching an Easter sunrise with Ariel at Initial Point

While it was great to be near friends and family during this time, we were itching to hit the road again. So, in June, we took off for short stay at Mt. Hood, on the way back up to Seattle – to be able to move, but to still be around family while we sit through the current situation for a bit.