We’ve been running now on this system for several years, and during that time, we’ve done a couple of upgrades, and learned a lot.

First, we added two batteries, and we’re now up to 1200ah. It’s made a huge difference in our energy consumption, we can go a lot longer on a charge. Our generator coupled with the transformer can still charge them lickety-split, so we’re very happy with our setup. This also allows us to finally get some useful air conditioner run time out of the battery storage.

A new battery tray had to be created to accommodate the 4 batteries.

Second, we have in the past run into an issue at several Thousand Trails parks, and a couple of state parks. This is concerning these parks being limited to only 30a on their power poles.

So, here’s the thing. When we installed our transformer, we installed it in line with the generator, so that it took the 110 volts, single phase, from our generator, and put out 240 volt, split phase – something our twin inverters could understand.

What we DIDN’T do was do the same for a 30a grid hookup (plugging in a 30a connection to the trailer plug). We needed to remedy this, so, we installed a selector on the incoming line from the wall of the trailer, allowing us to choose 50a or 30a manually, AND we installed an Automatic Transfer Switch. The switch would be able to sense between the 30a from the grid, or the power from the generator, and send them to the transformer. Which in turn would be able to send that power to our inverters.

Success! Now we’re good when we plug into a 30a power pole. We also installed a quick cut off switch.

Also, during these last couple of years, we’ve had a few bad times with the good times. One of our circuit breakers failed (Don’t go cheap on these! We learned our lesson here). And, probably most sourly, two of our batteries had cell damage due to bad firmware, but Victron happily warrantied them. Here’s what having two bad batteries with a bad cell on each battery looks like: 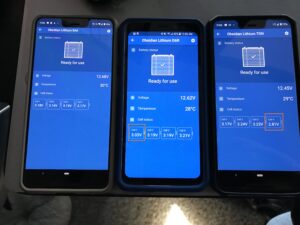 Overall though, our system is working great, and it still surprises us when something happens, and it does what it was designed to do.