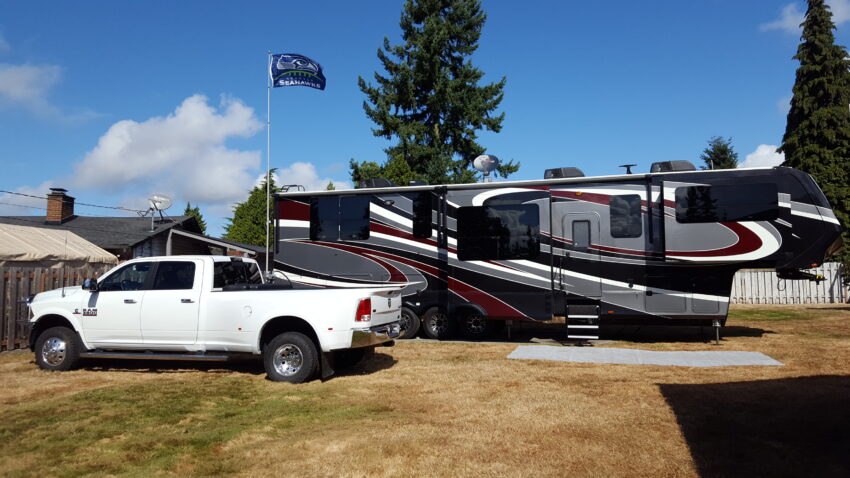 I thought I’d be better at being able to keep up with the blog, but surprisingly, without a job at the moment, I’m busier than ever. It’s weird how that works.

For the month of September, we stayed in Seattle. My folks have space on their property where they already had an RV pad from when they used to own their own travel trailer, and used it as a spare apartment for family and friends.

This was great, staying here. I was able to spend more time with my side of the family than I had in past years. Typically, when we were living in our house, we’d only be able to get up to visit them on a weekend once a year, and my parents would only be able to come down to Boise to visit for a few days themselves. It was a nice having some time to reconnect.

While we were there we managed to complete some projects on the trailer.

Our trailer has a front living area with opposing slide outs. On both slide outs there were couches. For just the two of us, we didn’t need two couches. There’s also a loveseat in the living area with recliners. So, we removed the couch on the passenger side of the trailer, and decided to make a work space out of it.

From conception we didn’t want to put any strain on the slide out motor, and we wanted to put as few holes in the walls as possible. So, we came up with an idea for a “box” of a sort, using 2×4’s horizontally, and 2×6’s vertically for support, using L brackets. On the vertical supports we’d install a set of Ergotron Wall Mount systems.

With monitors and wall track installed

Now, what to do about seats? Since the slide moves in and out… how do you sit comfortably, in a system that needs to be flexible but supportive? We quickly came up with the idea to put some 2×10 boards on the floor with some brackets and they would also help support the rest of the system. We then took a couple of boat pedestals with a couple of captains chairs and installed them. At the end of the boards below the chairs we installed a portion of board with a hinge, that is able to support our weight on the main floor when we’re sitting, but can be kicked up so the slide can be moved in and out.

And… with a few other touches, and our equipment… this is what we’ve got right now:

Our work (and play) space

Another shot of our work space

We eventually will be towing our Grand Vitara behind our trailer, so we needed to install a hitch. Also, as the rear of the trailer sits a little low, we wanted to install some rollers – so if it ever “kisses” the ground, it’s able to roll, and not cause any damage.

We bought a 4 foot receiver tube, and some steel… and with my Dad’s handy tools and skills, we came up with a hitch that we could bolt on to the frame attached cross-members under the garage portion of our trailer.

From the rear, with the rollers installed also.

Finally, we did some interior construction – including remodeling the stairs leading into the bedroom (the factory stair construction was… garbage) and put some shelving in a cupboard that desperately needed it (it only had one horizonal shelf).

There was always something happening at my folk’s place. Friends and family working on projects, great food (my dad loves to cook!), and this amazing train set under construction.

My sister has two children, and it will be great to watch them grow up as we get to spend more time in Seattle as the years go on.

On our last night there we celebrated with Oysters… shooters, Rockefeller, deep fried, and smoked… it was a great send-off night.

Here’s a mosaic of some pictures from our stay.

Dad’s train set under construction (he wrecked it, heh)

Heather and Nate at the Cactus in Bellevue

Quartz enjoying the scenery on a drive.

Mica chilling on the couch