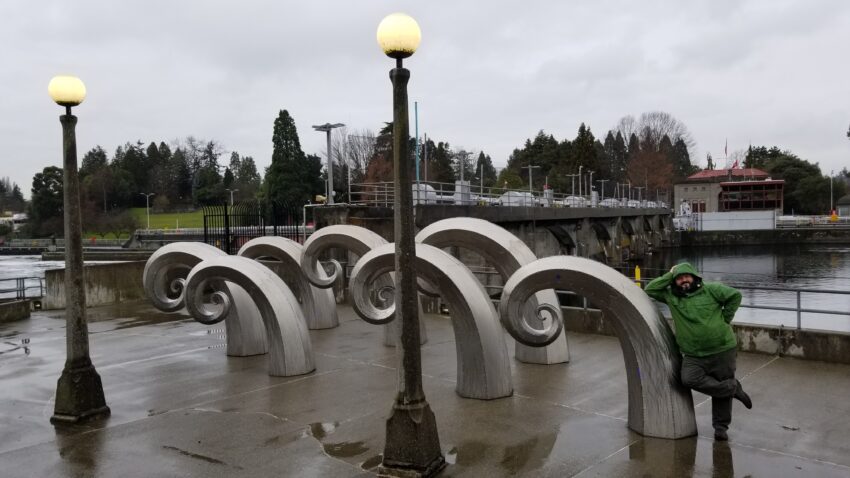 While we were in Seattle we did a lot of exploring. The following are a few places we visited. Lots of pictures incoming!

We discovered a great place to get a view of Seattle, that was higher than the Space Needle. It cost less, and was much quieter. The Columbia Center tower offers an observation floor, with windows all the way around.

Heather with her camera

The Space Needle (it’s under rehabilitation)

You can see our Suzuki!

On one occasion, we decided to spend a rainy day at Ballard Locks.

It was informative and fun to watch the boats go through the Locks as they come out of the salty Puget Sound into the freshwater areas of Lake Union and Lake Washington.

Nate at Ballard Locks with train drawbridge up

A neat wave art display on the other side of the locks.

Heather in front of boats waiting

We also spent time at Lake Union, including Gasworks Park.

Looking at Seattle from Gasworks Park

Nate and puppies with Ballard behind them

The old gasworks at Gasworks Park

Finally, we went on an all day road trip that took us down past Yakima to the Columbia River. We decided to have some fun and travel the river back on the north side, rather than use Interstate 84. We saw the John Day Dam from the North side, as well as a really neat place that is a replica of Stonehenge, that exists as a WWI Memorial.

Stonehenge Memorial on the Columbia River

Sunset with Mt. Hood in the background