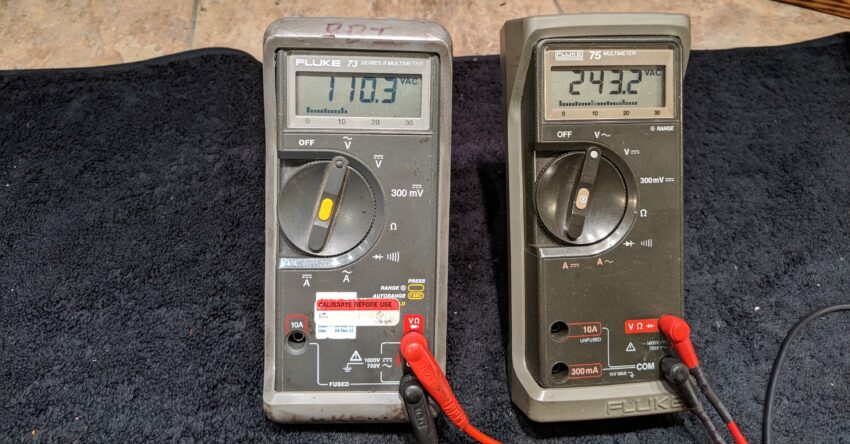 On our last Solar related post, we mentioned the issue with our Onan generator. I’ll try to explain it better here.

So, we have a Cummins Onan QC 5500 Generator. Many RV’s out there are equipped with some version of this generator, so it’s nothing really special, but we wanted to be able to utilize it fully as it would do the job just fine if we could.

On the front, under the panel, it appears to have two 30 amp breakers.

There’s where we got confused in our initial install. We thought that since it had two breakers, it must have two ‘legs’, right? Meaning it should be able to feed both of our Quattro inverters?

Actually, no. Unfortunately, it does not have two ‘legs’, it has only one, and that means it’s sending out a signal that is in a single phase. Power from the grid (shore power) is typically sent in split phase. For RV’s – this means two legs of 120v power – adding up to 240v. Here’s some information from another site: http://www.myrv.us/electric/Pg/50amp_Service.htm

Basically, what this means is, one of our two inverters was taking in half of the generator’s output power, and the second inverter was just ignoring the other half because it didn’t know what to do with it, as it wasn’t in the correct split phase. We now had a 5500 watt generator that normally puts out ~46amps… only able to put out about half that power. Because of this, it could only charge our batteries at half the rate, and could only run one air conditioner.

After some deliberation and discovery, we determined we could have a transformer created that would fix this issue for us. Once we finally decided to do it, we made an order to a company that hand builds transformers to your specifications – Electronic Products Design, Inc – http://www.epd-inc.com/, and waited. Since it would take several weeks, we worked our schedule around being back in Boise after it arrived, so we could do the install.

For this install we found ourselves again at a friend’s house, who was gracious enough to put us up in their driveway and give us a hand. This friend works on electronics for a living, and has the right tools for the job.

In the picture, you can see how the transformer will take in roughly 110 volts, single phase, and put out 240 volt, split phase.  It’s also step-up transformer – which allows us to squeak a little more power out of our generator.

Adding this transformer means that our inverters will act the same as if we’re plugged into 50a RV shore power. Nothing will be ignored.

During this install we also removed the factory transfer switch, as it was no longer needed, because we could now use the internal transfer switches inside the Quattros. We added in an EMS, using it’s wiring to help protect us from dirty shore power.

Nate inside the generator compartment

Setting the transformer in place

Working on a new EMS

Generator now hooked up properly in the inverters

Additionally, we created a control box using special timers and a relay to make it so we could use the “auto start” function in our Victron CCGX Control Panel. Now, we can set it so that if our batteries’ state of charge reaches a certain point (when they drain down far enough) our system will auto start the generator, or if we end up drawing too much load from our batteries, it will also auto start. It can also auto stop as well once it’s charged the batteries up enough. Using this method, technically we could run our air conditioner almost as long as we’d like.

Finally, we added sound deadening over  the surround of our generator. It has really helped to prevent some of the noise getting into the trailer.

1 thought on “Solar – Our Generator Gets Some Love”