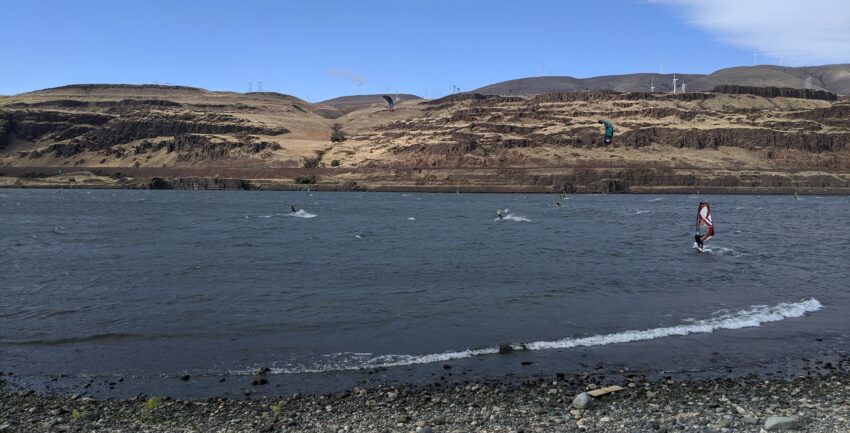 We headed up to Rufus OR again, from La Pine, on the way back to Boise. Rufus makes a great stopover – though this time it was really busy with other people doing the same thing. It worked out though, as Heather had to run up to Seattle for a day to take Mica to her final checkup with her surgeon for her knees, and Stacy and Justin had an RV Rally they were heading to in Richland, WA. They were able to stay with us a few days in Rufus though.

While parked in Rufus, we drove down to Mt Hood hoping to see something, but it ended up being too rainy, so we went into the Lodge and hung out instead. We also visited a friend in Mt Hood Village, and on another day we drove down to Multnomah Falls.

Rufus from the air

Stacy and the doorknocker at Mt Hood Lodge

Sometimes you get to refill your good karma meter completely to the top, and sometimes things make you reconsider your choices and go over your courses of action should something happen.

On the evening that I was due back from Seattle, Nate had been in contact with me on occasion to check on my progress. While I was somewhere between Yakima and Toppenish, he went quiet for a while.

Nate got called out of our trailer by a couple of frantic people, saying their windsurfing friend was in the water on the river, couldn’t get her kite back up, was stuck in the current and couldn’t get to the beach. Luckily we had our kayaks with us, he grabbed one and his dry suit, and dragged the kayak down to the river and headed upstream to help.

He was able to get her to the beach by having her hold onto the back of the kayak. He then pedaled downstream and got back out. It was very windy, and the waves were rolling. He called me after he made it back to the trailer. He didn’t take his phone with him because it all happened so fast he wasn’t able to let me know in advance what was going on. I’m glad everything worked out and everyone was safe, but it was scary for sure.

The story doesn’t end here though.

The following day passes, and then early the next morning at about 2 AM, Mica starts barking waking us up. There’s a knock at the door. We were both nervous because of the time, and these were strangers knocking on the door. Justin and Stacy were gone already, so it wouldn’t have been them. Nate opened a window to ask what was going on. A couple of local American Indians (very drunk ones) needed some help – and we were the only ones on the gravel bar that night with a big truck (our Ram). Nate armed me, and I gave him my pepper spray. He went outside to talk to them, while I stayed by the door.

They asked if he could drive down the road to an Indian boat launch area, because their truck was stuck in the sand there, right at the edge of the river.

Nate put me on speaker phone and I muted myself so our new company didn’t know I was listening. He also sent me a live location on his google maps. Then, they all hopped in the Ram and went down the road.

They got to the launch area, Nate still wary as it was late and dark, and he didn’t know what they were taking him to – then as they got closer, he was able to see ruts in the sand, but no stuck truck. So, he was still fearful.

Our two new friends stare in silence for several minutes. Then one of them casually says “Hey, your truck is gone, man, I think it’s in the river.” They then get out, and one of them walks straight into the water up to his neck and starts throwing gear that used to be in the back of this supposed truck onto the nearby beach. Clothes, boxes, straps, etcetera.

At this point, Nate breaths a sigh of relief, that nothing bad was going to happen to him, and then astonishment that there is probably a three quarter ton red Chevy pickup truck in the river (as it was described to us).

He ends up taking them to several places, including Goldendale to knock on some doors, Marysville State Park (where they pick up another bewildered friend), and then The Dalles to drop them all off at a fishing encampment there.

He finally comes home after about two hours, and we talk about the night, then go to bed hoping to check out the aftermath in the morning.

Morning comes, we head down to the boat launch for a look, passing a COE ranger on the way. We flagged them down and had them come with us so we could share the story.

When we left Rufus, we weren’t entirely sure if the truck actually ended up in the river, but a couple of days later the Oregon State Police call us for our side of the story, and just recently (a couple of days ago), we get a message from one of those involved that it was indeed 30 feet under.

The COE Ranger and Nate have a talk

There are more details to the story including near hypothermia, attempted payment by Chinook salmon… but you’ll have to ask Nate to tell it in better detail sometime around a campfire.

After Rufus, Nate and I headed to the Wildhorse Casino for a night at their RV park to hook up to do a few loads of laundry and clean up. It had been a while since we were plugged into anything. Then, the next morning we pulled out and parked in the overnight RV parking/boondocking area in the Casino parking lot to meet up with Stacy and Justin for our trip to Boise the next day. Nate and I visited the Pendleton Woolen Mills while we were in the area.

We were only staying here for a couple of days to unload some things and visit with friends and family. We had some fun showing Justin and Stacy the area, including the place where Nate and I met – Table Rock, the little butte above Boise, that holds the lit cross that oversees the valley. We got together for a pizza party at Chicago Connection, and had a couple of great dinners with Nancy and John.

We still play Ingress, and introduced it to Justin and Stacy a few months ago. The timing worked out right for us to join a First Saturday event in downtown Boise on a Saturday morning, where we got to meet a fun group of other players, and explore the town.

Heather and Nate at Table Rock

Justin and Stacy at Table Rock