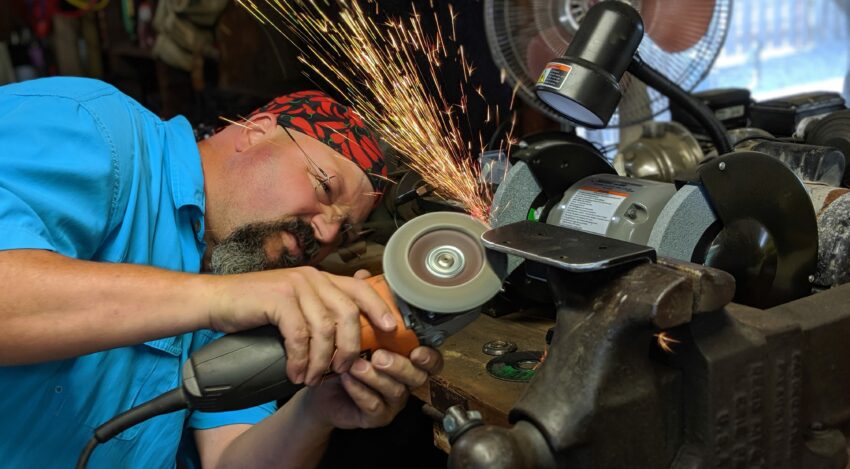 While in Seattle, we got a lot accomplished project-wise. We helped Dad with a few things including pouring concrete for and building a neighbor’s shed. We worked on some nice updates for the trailer, as well as fixed the brake line issue and installed some CB and Ham radio gear. We helped maintain the yard, and also changed the oil and filters in our trailer’s generator. I don’t think a day went by we weren’t doing something.

Here’s a few pictures of the Neighbor’s shed:

All the walls up

Roof on and trim being attached

When we were at Chickahominy Reservoir, I mentioned that something had happened to our trailer’s fender. Well, on our travels after, we had to put brake fluid in the trailer while in Newport. It wasn’t empty, but it was down a bit. When we got to Seattle we were able to do a better inspection, and it appears we did run over something, but not only that, when the brakes were installed, one of the frame clips ended up being directly inline with a u-bolt so when compressed, the u-bolt crushed the brake line clip, causing the rubber brake line to change position and rub on the tire causing a leak. Glad we found it while we were in a good spot to repair it.

Bill Perrin (the installer we used previously) happened to be in the area while we were there (great timing), so he stayed a few nights on the property and helped us fix it.

I got a new fender by calling our dealer Bretz RV in Boise, and I paid to have one shipped to me. It was fairly inexpensive.

Crushed brake clip with the u-bolt below it

The damage: crushed clip causing the rubber line to rub on the tire

Bill Perrin fixing us up

Putting on the new fender

For the interior of the trailer, we added some niceties like cedar plank in the bedroom closets, and installed some peel and stick rock tile in the kitchen area.

Cedar in the closets

Finally, we spent quite a bit of time installing Ham Radios in our Ram, in Justin’s Ram (along with a way to organize items on his dash), and in the trailer. We also put a CB antenna on the Suzuki. Feels good to get all that done.

Nathan shaping the antenna bracket for the trailer

Heather running coax down the frame of the trailer

Antenna with mast and bugcatcher on our Ram

Radio set up in our Ram

Justin’s dash install including a VHF/UHF ham radio, back up camera, TPMS, and GPS

Cleaning up the CB antenna bracket for the Suzuki

Since Justin got his Technician’s license by passing his exam while we were in the area, we enjoyed sharing the installs with him and have been talking on the radio during our travels ever since.